Spaghetti Tacos & Spaghetti Nachos ~ iKidding around in the kitchen... 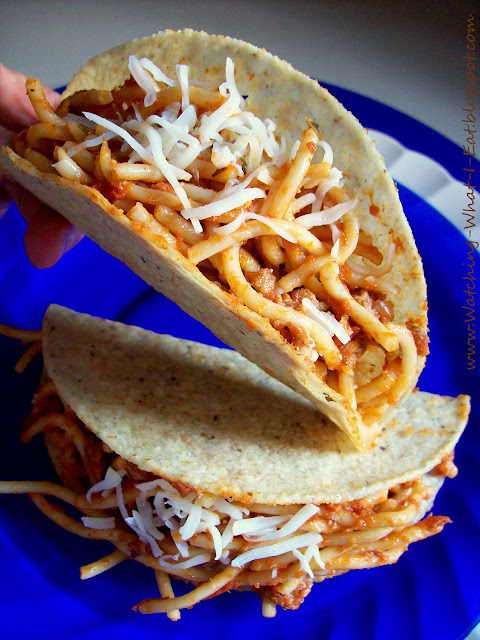 Spaghetti Tacos & Spaghetti Nachos ~ Yeah, right, a meal made from spaghetti & tacos shells ~ t.o.g.e.t.h.e.r??  Who knew there was such a thing?  Turns out, A TON of people know about this dish, especially if you're a Tween & watch iCarley.  Since I have a son, ((who is not a Tween)), who has never seen that show ((me neither)) I had no idea such a thing existed.  I just learned about it while surfing the Internet, innocently looking for new recipes using leftover spaghetti.  ((I had some leftover spaghetti, from when I made my brother's recipe, Mike's Homemade Spaghetti Sauce))  I was shocked to read so many compliments for the Spaghetti Taco recipe.  The NY Times has even written quite the article to explain the phenomenon...AND there are TONS of videos on YouTube of this crazy dinner dish.  As I said before...Who knew??   This is what I found on YouTube from the actual show...


There is even a recipe for a lower calorie version from the Hungry Girl site...  Well, if she can make them, I guess they can't be too bad...

I was skeptical, to say the least, but I do like to get creative with my leftovers, so I decided to give this dish a try.  Happy to report, they really do make a perfect match.  Spaghetti  + Tacos = 1 Happy Kid/Mom!  It's a cheap & cheerful meal, especially if you are using up leftovers.  Another great thing about them is you get Cool Mom Bonus Points for making them.  Alright!  J loved them & actually, so did I.  In a pinch you could even used canned spaghetti & heat the tacos in the microwave.  Dinner on the table in 5 minutes, too cool! 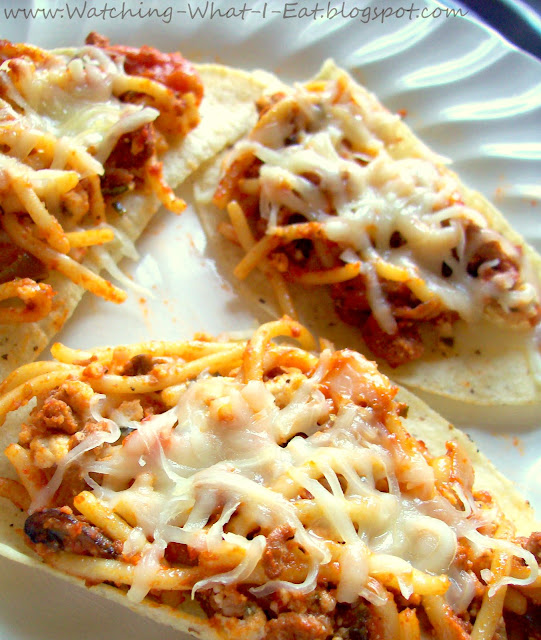 We even came up with our own spin, we made Spaghetti Nachos.  Some of the taco shells were cracked, so we just topped them with spaghetti, shredded cheese & heated them in the oven until the cheese melted.  I think we even liked it better that way.  After all of this, maybe we'll even catch a rerun of the show or maybe next time we make Spaghetti Tacos or Spaghetti Nachos we'll even save some for Dad to try....just maybe.  :)